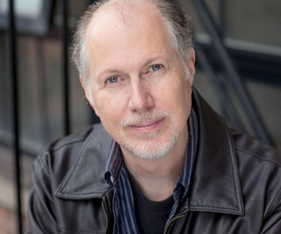 Joseph Travers,  Artistic Director
Joe has worked in the the professional theater and on film for over thirty-five years as an actor, singer, musician, director, playwright, composer and fight director.  As an actor, his work has been seen Off- Broadway as the father in The Witch (directed by Benjamin Zemach), regionally as Honeyman in A Walk in the Woods, and on tour as Antipholus in The Comedy of Errors.  He wrote and directed the recreation of a 19th century pistol duel in  A Matter of Honor at the Morris-Jumel Mansion, and along with co-creator Rod Kinter, wrote, directed and fight directed the critically acclaimed Duellists: The Forgotten Champions at Theatre Ten-Ten.  Other directing credits include The Pied Piper at American Theatre for Actors, a touring adaptation of Anderson's The Brave Little Tailor, and a production of Chaucer's The Wife of Bath's Tale  for the New York Renaissance Festival.  As a playwright, Joe's scripts for The Proxy, Within These Garden Walls and Sanctuary (the Bayard Trilogy) won the 2014 Alumni Playwrighting award from his alma-mater, SUNY Albany, where they also received their first performances.  His other plays include Ave Imperator, The Heirloom and The Holly and the Oak.  An experienced composer and musician, Joe created the title song for the dance piece By Cedar Creek (choreography by Barbara Brandt), performed a selection of the songs of John Dowland for An Evening of Music and Dance, and has created and performed music for productions of The Two Gentlemen of Verona, As You Like It, Edgar Lee Masters' Spoon River Anthology and Moliere's Scapin.    As a theatrical fight director, his work has been seen on Broadway, Off-Broadway, in Regional theaters, on National Tours, and internationally.  He was nominated for a 2019 Broadway World best choreography award for his work creating the climactic mutiny scene for Robin and Clark’s musical adaptation of Treasure Island.
On film, his work as a stunt coordinator and sword master can be seen in The Depths, Know Fear and Tower of Silence.
​           As the founder and Artistic Director of Quest Players, he has programmed and directed both the the podcast installments and live performances for the company's  American Voices dramatic reading series, and his Shakespeare adaptation All Is Fair  will be the inaugural production of Quest Players' first in-person season.
​         He is thrilled by the opportunity to work with such wonderfully talented performers to bring words, ideas, stories and characters to life, both on stage and in the virtual world!