Austin Anthony attended The American Musical Dramatic Academy and graduated with high honors. You can see his work in the films “The 420 Club”, “Cool Cat”, and “Playboy Eddy”.  Austin is also a professional rapper and hip-hop music producer. You can find his work at  iamaustinanthony.com Brooke Beyer is a New York City based actress. She attended the American Musical and Dramatic Academy’s New York Conservatory program for Acting.  A strong passion of hers is Stage Combat; having extensive training in various weapons which includes certifications by the SAFD for Broadsword, Single Sword, Rapier and Dagger, and more to come! She is extremely excited to be working with Quest Players and ready for the journey with them ahead. Una Clancy was born and raised in Dublin's Fair City.  She took to the boards at a young age, drawn to the magic of it all.  Una has especially enjoyed playing a lovelorn frog, a witch of Hecate, an unstoppable tailor, a raging Goddess, an aging puppeteer, Juliet's nurse, a heart-broken mother and an outcast Queen.  She wants to play Mother Courage one day and pull that cart with gusto. Shakespeare, the Greeks, Chekhov, Ibsen, O'Casey and Tom Murphy make her soul sing.  New York venues include The Irish Rep, 59E59, Bryant Park, and The Tank.  Una also taught 7th grade Social Studies for 14 years, so she knows more than the average bear about thinking on your feet and improvisation. Liz Kelsay is a New York City based actress. She recently graduated from The American Musical and Dramatic Academy in the acting program. She is a stage combatant trained in unarmed, rapier, rapier and dagger, broadsword, knife, smallsword, and arnis stick fighting. Her most recent project was a virtual production of The Seagull by Anton Chekhov where she played Nina and served as the director. 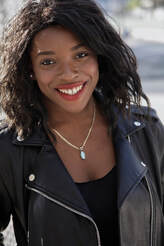 Adra Mayer is an actress based out of NYC, recently graduated from the American Musical and Dramatic Academy for Acting. She recently worked on features, short flms, and musicals including Antlers, Stand Up, Players and Hoseki The Musical also working with amazing directors such as Kate Kim, Gustaf Bjorn and Takunda Kramer. Her work also includes commercial work with OPPO. She is excited to be joining the Quest Players team and cant wait for what's in store! 􏰃􏰄􏰅􏰆􏰇􏰁􏰈 􏰃􏰊􏰋􏰌􏰍􏰎􏰏􏰌􏰋Madelyn Mikshowsky is a graduate of the American Musical and Dramatic Academy, loves to paint, sing, and is SAFD certified in Rapier & Dagger. She chose acting as her life long career because it is a goal of her's to have changed at least one person's view of the world after they leave the theater. She is grateful to her friends and family for their love and support, especially her mother, who always pushed her to do the scary things in life. She would like to thank all the players who came before her on the stage who helped make this possible.

Andrés Montejo is a New York based, Costa Rican actor and founder of The Acting Master Class Project (amcpny.com). Stage credits include Constellations at The Artery, Much Ado About Nothing at The Playroom Theatre, Mr. Invincible Explains it to the World, etc. Mr. Montejo has appeared in several short films and commercials, such as Strawberry Flavored Plastic (Amazon Prime Video). Voice Over credits include Chase Bank, Twisted Tea, CISV, Polo Ralph Lauren.

Nic Moore is excited to join Quest Players and the cast of All is Fair ! Nic is an actor from the San Francisco Bay Area. On the West Coast he performed with Curtain Theatre, Sonoma Arts Live, Alter Theater, The New Conservatory Theater Center, Theatre Rhinoceros and many more. Nic is a recent graduate the the American Musical and Dramatic Academy. 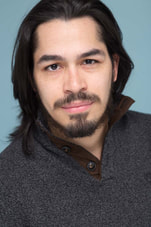 Gabriel Rosario is a graduate from the American Musical and Dramatic Academy.  He is an Advanced Actor Combatant, Stunt Performer and Fight Choreographer who has participated in plays such as Foggy Dew, The Adventures of Don Quijote, Follies, The Relationship Type, as well as being Fight Captain and Assistant Fight Choreographer for the World Premiere of Treasure Island at the Fulton Theatre and its East Coast Premiere at Maine State Music Theatre.  His film and TV credits include Dead@17: Rebirth, Tower of Silence, as well as the upcoming pilot, Dry Time, etc.   His credits as a Fight Choreographer include Romeo and Juliet, Faust on 147th Street, and Valor, Agravio y Mujer at Repertorio Español (HOLA Award Best Fight Choreography), La Paz Perpetua at Repertorio Español, Rut and the short film Les Chienes. 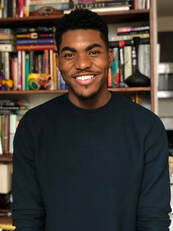 Nigel James Sudarkasa is a 21-year-old, Acting major at the American Musical and Dramatic Academy, in Los Angeles. Born and raised in Johannesburg, South Africa, to two African-American parents, he takes pride in being multicultural and multidimensional. Upon graduating High School at the top of his class, he relocated to the United States to pursue his lifelong dream of acting. He is hardworking, tenacious, and persistent in his craft; and curious, personable, and adaptable in his character. He is always seeking opportunities to connect with a diversity of people and grow as a performer. 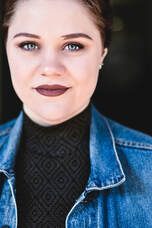 ​Bailey Van Schepen  graduated the American Musical and Dramatic Academy in New York City, and has dedicated her career to the works of Shakespeare and stage combat. She has worked closely with fight master, David Brimmer, in his stage combat courses at NYU. She has also been the fight choreographer for John Jay's production of "Rehearsing the Wannsee Conference" directed by Vernice Miller, as well as Black Revolutionary Theatre Workshop's "Afterswarm." After spending her 2018 season at the New York Renaissance Faire as Captain Grace O'Malley, she returned in 2019 in the same role as assistant director. Further credits include Columbia MFA's production of "Troilus and Cressida," as Ulysses, and Sketch of New York Productions' premiere of her own play "BEHIND GLASS WALLS: THE ANXIETY PLAYS," as Haley, with more opportunities to come. She is honored and humbled to be apart of the Quest Players and is looking forward to the journey ahead. Hannah Elizabeth Williams  is a graduate of the American Musical and Dramatics Academy. Since graduation she has served as a swing for the Off Broadway production of “Full House! The Musical!” (Stephanie and Michelle Tanner). She also has done production work as a script supervisor for multiple short films and the Indie Feature “Seneca” which has gone on to win several awards, including an HBO Latin Film Festival award.